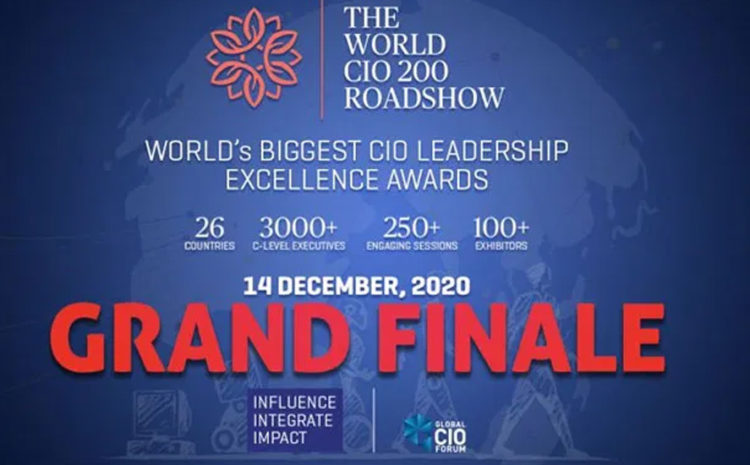 A key highlight at the grand finale of the World CIO 200 Roadshow, held on December 14 in a virtual convention centre, was the CIO 200 Country Awards. CIOs from organisations in the UAE, who have been the catalyst in bringing about change in this challenging year, were honoured with this award. The winners also received blockchain certificates. This year, the impressive lineup of exemplary CIOs included:

About The CIO 200 Summit

Established in 2017, The CIO 200 Summit is a multi-country CIO felicitation ceremony that recognises achievements of digital leaders. The CIO 200 Awards are not a competition but a celebration of the amazing lives of CIOs and their game-changing careers.

The 2019 edition of the event toured 15 countries and gathered over 3000+ delegates over a span of three months. Key stakeholders tabled roadmaps for strategic decision making and identified yardsticks that are the key drivers of growth in the digital world. The World CIO 200 Summit 2019 concluded over December 09-10 with a gala event at the Double Tree Hilton in Ras Al Khaimah.

The highlights from the 2019 edition can be seen here.

The role of a CIO is one of the most critical one in today’s business and industry. Today, CIOs hold the future of innovation, productivity and competitiveness in their hands. At the Global CIO Forum, we not only provide our members with an exchange forum for best IT leadership strategies and practices to enhance business results, but we are also developing a strong voice to ensure that CIOs are represented at key industry and government decision tables. In other words: Integrate. Influence. Impact.

The Global CIO Forum’s mission is to represents IT Executives and CIOs globally. Currently working in META region and with expansion plans globally, the Global CIO Forum is a non-profit community of CIOs and IT leaders whose mission is to facilitate networking, sharing of best practices and executive development, and to collaborate on issues faced by the CIOs and IT executives.